As you roam around in the Bangalore, you will come across with the fact that the contemporary Bangalore is the synonym of rich culture, age old heritage and spirituality all rolled up into one. One such sculptural masterpiece is the bull temple located in Basavangudi.
Despite the fact that Bangalore has changed with the changing times, the temple has remained as such.  It is visited by lakhs of devotees every year to quench their spiritual thirst.

Reaching up to Bull Temple

It is as simple as that. You will find the temple located in the southern end while you go down the bull temple Road. Although, if you have arrived in the Bangalore already and is heading towards the temple from somewhere else in the city, just go for local buses (KSRTC), taxis and auto-rickshaws.

There are ample of them to assist you in your journey towards this shrine. Even if you are coming straight from the Airport, you can certainly choose any of these local transports to arrive at this place.

What to see in Bull Temple

The thing that will immediately capture your eyes when you enter the shrine premises is the colossal monolith of a bull (Nandi). This temple is one of the oldest temples in the entire city. It was built in 1537 A.D. by Kempe Gowda. The bull image here is considered to be the wagon of Lord Shiva (a Hindu deity) and it is believed that this statue is much older than the temple itself.

You will observe that the temple is not very widespread but it certainly boasts of housing the largest sculpture of ‘Nandi’ in all over the world. This monolith is carved out of a single granite stone and is about 5m in height and 6m in breadth.

Behind this mammoth sculpture, a ‘shiva lingum’ is situated. The temple takes you to the Dravidian era, as its architecture clearly reflects that. The vicinity of the temple also houses the famous shrine of Lord Ganesha, popularly known as “Dodda Ganesha Temple”. 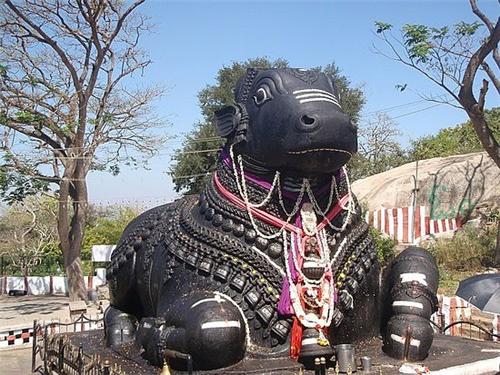 According to a legend, the sculpture of the bull was placed here to pacify a bull, who was trying to nibble away the entire groundnut of a nearby field. It is also believed that the statue of this bull keeps on growing. You can observe a trident placed on the head of the bull.
It is said that it was directed by Lord Shiva to place this trident here, so as to prevent it from growing further.

If you happen to be in the city during the month of November or December, you can witness the Kadalekaya Parishe (groundnut fair) festival here. During this festival farmers offer their first harvest of groundnut crop to the bull image. It is done to pay the gratitude towards the Lord Shiva.

Where to relax in Bull Temple