People of Bangalore are truly like a secular spirit in its core, enveloped in a single multi-religious body. The city boasts of its secularist environment and it is undoubtedly true.
These churches are very historic and are architectural landmarks of the City. You can reach get up to these churches easily by your own vehicle or check some of the local transports of the city. 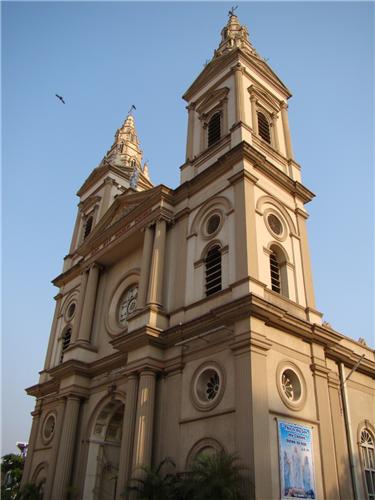 All Saints Church in Bangalore

All Saints Church can be reached by taking a route towards the Hosur Road located in Richmond Town of the city. The foundation Stone of this church was laid on 27th November, 1869 and it was consecrated 17th October, 1870. In August 1905, a Pipe Organ (English in origin) was made in the church.

The then President, Mr. Robertson, gave the same to All Saints' Incumbent, Canon Foley in 1901. It was then used as the Church Institute for young people and as a meeting place for parishioners.

The men's society, in 1908 organized  a Reading Room and Library under Rev. Walsh. In 1911, the Church Committee which looks  after  the Institute, overtook it. The building was extended with the installation of electric lights in 1912.

Sacred Heart Church was moved to a small bungalow near the cemetery of the priest in 1886. The foundation stone for the construction of a new church was laid by Rt. Rev. Msgr. Kleiner in 1893. The first feast in the new church was celebrated in the year 1896.

In 1934, a school was built for boys and girls. Father Megr. ’Souza started the Corpus Christ procession in sacred heart church. The Sacred Heart Novena was started by Fr. Paul Kinatukara in 1965. Sacred Heart Church continued to grow. A plan is proposed to build new buildings for the priest house and the school.

FGAG Church is located in the main Defense Colony in Indaranagar in the city is yet another place of worship that is enormously popular among people. Here, FGAG stands for “Full Gospel Assembly of God”.

Full Gospel Assembly of God works under the organization of the Assemblies of God. This organization has over 65 million members in all over the world. Merely three people established it in the year 1982.

Full Gospel Assembly of God Church is dedicated to pursuing the path of the God's wish to sermonize to the lost in the least possible time and encouraging harmonious relationships.
Services on Sundays from 5.45 a.m. onwards are conducted in the Church.  Other services of the Church during the week are 5.30 a.m. morning prayer, the Widows Church, the Women's Church, the Bartimaeus Church and a Saturday morning 10.00 a.m. service.

All peoples Church in Bangalore

All peoples Church is located ON the 14th Cross R.T. Nagar in Bangalore. On February 18, 2001, All Peoples Church was established by Ashish Raichur. Its first service was attended by 10 people only.

All Peoples Church is basically training and equipping center. All peoples Church endeavor to share Jesus with people. This Church is now counted among the most popular Churches of the city.

The St. Johns Church in Bangalore

St Andrews Church is a Scottish Church, located on Cubbon Road in Bangalore. It situated parallel to Mahatma Gandhi Road (MG Road).  The Church is a perfect piece of orthodoxical Presbyterian Scottish architecture. You will notice a belfry and a chiming clock over the tower.

This church was established on Nov. 22 1866.  It is adorned with contains stinted glass windows that depict Lord Jesus and his eight apostles. The walls of the church are embellished with polished brass plaques and in 1881 a pipe organ was also installed here.

Another such church is Marthoma church located on Primrose Road in Bangalore. In 1917, on a small scale Syrian Christian worship at United Theological College (UTC), Bangalore. In 1943, Rt. Rev. Dr. Philipose Mar Chrysostam Valiya Metropolitan was posted as the first vicar.

At that time the St. Paul's church located near Bowring Hospital was used as the worship place on Sundays. It was in 1960 when the worship started mainly in its current premises.Every Sunday there are two worship services. The first one at 7.15 AM and the next one at 10.00 AM. 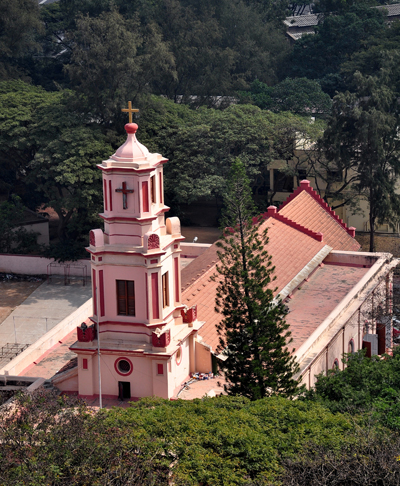 When you walk towards the east end of the M.G. Road, you will find Trinity Church at the trinity circle. This church of Victorian era worked as a historical milestone of the city. Bishop Corrie chose the place to erect this church. It is built in the English Renaissance style.

This church found its foundation on February 16, 1848 and was opened for public in August 8, 1852. A visit to this place will take you to the colonial times.
You can notice the stone tablets and statues of generals and other military officials, on the walls of the church. Rev W W Lutyens designed the embellishments.

The Holy Ghost Church in Bangalore

The Holy Ghost Church is located in Richards Town in the city. It is the largest parish in the whole city. Its design was developed by Stanley Fernando.

It was established on May 24, 1953 by Archbishop A. S. Colas. The prime attractions of the church are its exquisite marble flooring and its beautiful galleries and windows.

St Patrick’s Church is located right at the Brigade road. This church was built for Irish soldiers by Gail. The church was reformed in 1894. And it was consecrated as a cathedral in the year 1899.

The most beautiful part of the church is the dome shaped entrance arched by two large pillars. Further adding to the grace, there are twelve pillars in the church that symbolizing Christ's twelve apostles.

Christian fellowship church Bangalore was conceptualized in August 1975, when a few families that first met together in Bangalore and decided to follow the Lord Jesus Christ.

It was based on the belief of emphasizing the new birth, mutual love, financial integrity, holiness of inner life, moral purity and sharing God's truth with others. It is located on DaCosta Square, in wheeler Road extension in the city.

AG church is located on Ring Road, Hebba. It is known to be the biggest Christian Churches in India. Since 1984 Rev. Dr. M A Varughese is the Senior Pastor of the Church.  It was started by a small group of people in the year 1995. It has a capacity to accommodate 10,000 people.

The St. Vincent Pallotti church was established in the year 1980 and is located in Banaswadi in the city. It was previously designed along the east west axis.

The design was made to catch the westerly breeze. The prime attraction of the church is 14 stained fiberglass paintings.

CSI church stands for Church of South Asia. It was established by  the union of Anglican and Protestant churches in South India. It is located on the M.G. Road. Main festivals of this church are Good Friday, Easter, Passion Week and Christmas.
Here Harvest Festivals are also conducted. These harvest festivals are celebrated during the last week of November or the first week of the month of December .It is celebrated as a thanksgiving service to God.

Paul Thangiah church in Indra Nagar Bangalore was established by Paul Thangiah. He dedicated his life to the Jesus and worked extensively for the church.

The Church was established in the year 1982 and is caring, serving and expressing the love of the almighty Jesus Christ to people. It was one of the most popular churches of the Bangalore city.

BTM church Bangalore was started in Nov.4, 2007. Pastor. Ken & Mary along with Pastor Simeon & Vijaya from Bethel Baptist Church put their united efforts to this Church.

Despite of having a quite insignificant starting it became an established autonomous Baptist Church in the year 2010. You can visit the church at K.S.R Court, 7th Cross, MICO Layout, BTM 2nd Stage, in the Bangalore city.