Gavi Gangadhareshwara temple, popularly known as Gavipuram Cave temple, is one of the India’s oldest cave temples which is situated in Bangalore, Karnataka. 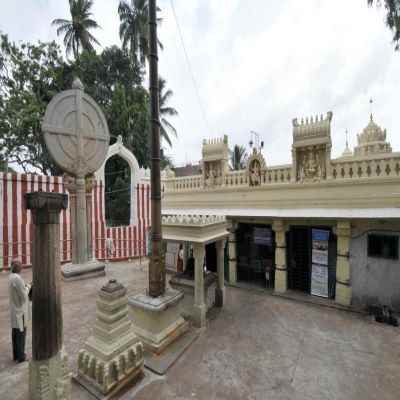 Since, Gavi Gangadhareshwara Cave Temple is built inside a natural cave, it is a highly dark place. However, at a certain time of the year in January, i.e. Makar Sankranti, a celestial event allows the sunlight to fall on the shrine of Lord Shiva (Shivalinga) as if the Sun is paying homage to the Lord itself. This unique phenomenon happens every year at the same time.

It makes way through the back of the idol of Nandi sweeping through between the horns and finally, falling at the foot of the Shiva’s shrine. This event, inside the Gavi Gangadhareshwara Temple, is accompanied by the chants of mantras by priests, who keep on pouring milk all throughout this delightful occurrence.

Along with the main shrine of Lord Shiva, Gavi Gangadhareshwara Temple also accommodates a Nandi Sculpture, Agnimurthi, a rare idol Lord Agni and many more deities. At the entrance of the temple, a huge image of Shakti Ganpati with 12 hands is placed.

A team of researchers and astronomers in Bangalore has recently concluded that this event is not restricted to just one day in a year. Nevertheless, this has also been proved that the same happening occurs again, somewhere around late November to early December.
Many other mysterious beliefs related to Bangalore’s Gavi Gangadhareshwara lay in the minds of the visitors, like about the rare two-headed figure of Lord Agni and a dark tunnel in other direction of the hill.

HOW TO REACH GAVI GANGADHARESHWARA:

Nearest Airport to Gavi Gangadhareshwara: The Temple is the nearest to Bangalore International Airport which is 35 kilometers away.