Bangalore’s hotel industry has flourished with time. From being the ‘Silicon City of India’ -the IT hub with almost all the business developing from here, Bangalore has also become a money-making machine for the Hoteliers. Many new, luxury Restaurants and hotels have come up in the Capital state of Karnataka.

A good hotel is a combination of comfortable stay, unique style, great hospitality, tempting food, serene ambiance and all of it, fitting into one’s pocket. For a place like Bangalore wherein and whereto people travel a lot, may it be for business or for tourism, grand hotels are a must. And as a matter of fact, Bangalore is blessed with many such stays.

Take into account The Taj, or the Pride, Oberoi or the Nandhini, St. Marks or the Park; all of these have sparkled the city and have lend hands in the growth of the Silicon City. All the popular roads of Bangalore like the MG Road, Brigade Road, Old Airport Road etc. are now illuminated with these Luxurious hotels.

Adding to the Pub Capital of India, these hotels have not only improved the Business in the capital but have also understood the needs of the Bangalore-ians by contributing into Lounges, Bars & Pubs. With places like the library bar, I-bar, Jamavar, Zen, Sheesha Lounge, WytRetro et al, the best hotels in the city have increased the count of visitors and guests in Bangalore. People from all over the World travel to this city to twist their tongues here.

IT hubs in Bangalore-the Electronic City or  Whitefield, Hotels have placed themselves  smartly close to eminent places for the accessibility of the common man as well as the high/Business class. Let us take you on a ride to explore some of the best hotels of Bangalore.

Some of the Top Hotels breathing in Bangalore are:

For people looking out for peace, personal time & space, Infantry Hotel is the best place to stay. With the connectivity with Commercial Street, just five minutes away, shopping is an add-on to its merits. Famous for its multi-cuisine restaurant “Jet Set” and a-la-carte of Chinese, Indian & Continental, this Hotel is a suitable place for quality time and good food. 72 rooms including appointed rooms (deluxe rooms and suites), complementary safety deposit boxes, 7-days laundry facility are some of the Hotel’s highlight.
Address: 66, Infantry Rd, Shivaji Nagar, Bangalore, KA 560001
Phone: 080 2559 1800

This 4-star hotel provides with deluxe, premier club and suite options for the visitors. This hotel provides two restaurants in central Bangalore having global & Indian cuisines in both.(Khayal Restaurant & South Parade Restaurant). This place also offers an informal setting called ‘The Lounge’ and four in-house conference halls for meetings and business gatherings. Don’t forget to avail the season-discount when you check-in. With hospitals and medical centers nearby, The Chancery also promotes medical tourism and arranges transport facility to all major hospitals.
Address: No.135 Residency Road, Bangalore
Phone no. (080) 41414141

Famous for Andhra’s hospitality and cuisine, Nandhini Hotels have entered into their third decade of business. Hotel Nadhini consists of a chain of 6 hotels and 12 restaurants all in the prominent locations like Jayanagar, J.P.Nagar, St.Marks Road, R.T.Nagar, Minerva etc.. Home delivery & outdoor catering are the speciality of Nandhini Hotels.

A 5-Star Hotel, The Pride, is prominently located in Central Bangalore with Vishveshwaraya Museum, Cubbon Park & Vidhan Soudha nearby. With a century of rooms in its Bangalore hub, it is a part of a chain of hotels in metro cities like Chennai, Nagpur, Ahmedabad, Chandigarh et al. Brand names which are born with the chain of hotels are Prida Biznotel and Pride Resorts, which again have different branches altogether.

Iris- The Business Hotel in Bangalore

The multi cuisine restaurant on brigade road called #70 Brigades is one of the expansions of this hotel.  Wi-Fi enabled hotel, ‘Quartz’- the 10-seater board room, secretarial services, ‘Silica’-the banquet hall are some of the highlights of Iris. Rooms here are labeled as the ‘Yellow/Blue/Purple ribbon room’ excluding The Club- Iris Suite which includes Jacuzzi and a state-of-the-art study. 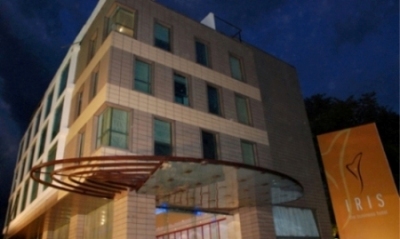 
Hotels in Koramangala, Bangalore. Check them out!

Are you looking for some smart space within the reach of your pocket to stay in Bangalore? Well, try one of the best budget hotels in the heart of the IT Hub of Bangalore. Ginger Hotels has 99 budget rooms with features like Smart Zone, Gymnasium, Smart Basics, Net Zone; this reduces the burden of paying more than you could. With amenities like self-controlled AC, coffee/tea maker, fridge and telephone, these rooms make your stay more comfortable. Do not forget to carry your ID proof while checking-in to Gingers. (Passport in case you are a foreigner).

On the same line here are some Luxury Hotels in Bangalore:

The Park Hotel in Bangalore

The Park Hotel is a 5 star contemporary banquet hotel. With a modern-Eastern architecture filled with red and gold color palette this hotel offers you with outdoor services, spa, fitness centre, outdoor pool, safety deposit box at the front desk, luggage store, smoke free zones, internet, salon, laundry, media library and others. I-bar is the most highlighted attraction of this city which is initiated by The Park. The Park also hosts ‘Monsoon’ a 24 hour restaurant in its premises.

Click to know about the hotels near Majestic, Bangalore

Brand New set of 86 luxury rooms were launched in the Oberoi in 2012. Rooms in this hotel are facilitated with LCD TV’s, internet connection, private butler service, spa, baby sitting, valet, currency exchange, garden, Chinese and Thai Restaurant and much more.

Matthan is a 5 star architectural deluxe hotel in Bangalore situated on the HAL Airport Road. This epitome of Culture is a luxurious space wherein one can easily relax and enjoy it to the fullest. On request airport transfer, a 24 hour business center, speedy internet and laundry facility are some of the basic features of the hotel. Banquet halls in Matthan are 4 in total and have a capacity of 600 seats. There are two blocks in the hotel namely Dynasty Block (145 Rooms) and Asian Block (198 Rooms) which showcase the great Indo-Asian structural designs & patterns. The lighting and the bedding are one the things with the contemporary touch.

Atria Hotel is a member of Federation of Hotel & Restaurant Associations of India (FHRAI) and was started in 1993 and is located on the Palace Road. The three center of attractions here are the Tijouri, Aqua Bar and 1498 A.D. which were started by Atria Hotel. The three main types of rooms provided by the hotel are Luxury, Lifestyle and Standard. In-Room services here includes seasonal fruits on request and daily choice of different newspapers as an add-on to all basic features.

Present just a kilometer away from the Kempegowda International Airport (former Bengaluru Airport), Hotel Presidency is a Heaven Home for Business Travelers. The hotel offers a set of standard, deluxe and executive rooms in the pocket-friendly range of 2 to 5 thousand rupees. ‘Nandanavan’ is the name of the restaurant the hotel provides with. A special service of wash and change is provided by the restaurant at a very cheap cost below 2 thousand rupees.

Know about the different 5 Star Hotels in Bengaluru

Fortune hotel is situated just off the Race Course Road with a distance of 4 kilometers from Mahatma Gandhi Road. Being a member of ITC group of Hotels, this hotel promises you a memorable staying experience. With a total of 260 rooms including guest rooms, standard rooms, suites and club rooms, this hotel combines design and efficiency. Restaurants ‘The Terrace Bar & Grill’ and ‘Orchid’ are present in the hotel to calm your taste-buds.

The Leela Palace in Bangalore

Inspired by Mysore Architecture, the palatial hotel combines richness of the culture with the majestic contemporary feel. Facilities like Wi-Fi internet and broadband connection, courier service, In-room safe and power adapters are offered in the grand hotel. Maharaja suites and turret suites are available here along with Royal Club Suites and Premier Rooms. Bars and In-House restaurants like The library Bar, Jamavar, Citrus, Zen and the royal dining club are a must try-outs if you are staying under The Leela’s Roofs.

The Paul in Bangalore

With 54 suites, this 5-star hotel has been famous for its ayurvedic center. Tones-the modern gym and swimming pool with Jacuzzi are present in the Hotel for comfort and pleasure. This hotel has ayurvedic amenities in every bathroom of the rooms and self-setting of optimum temperature in the shower is also an add-on. With Business settings and conference rooms, it is an appropriate hotel for seminars, meetings and conferences.

Click here to know about the 3 Star Hotels in Bangalore

Empire is a chain of non-vegetarian hotels & service apartments and restaurants spread across different parts of India and abroad. These hotels have been nicknamed as the ‘Taste of Bangalore’. These also deal in home delivering, outdoor catering and Lunch & Dinner Facilities. Hotel Empire has their Empire App for you to order food online.

Le Meridian is situated at a short drive from Manyata Tech Park and is situated nearby to Central Business District. Black, white and red tones cover up the hotel. Le meridian provides one with all the basic amenities including In-Room Movies / Video Games, CD player or Radio or Alarm Clock, LCD Flat Panel Television, Fruit Basket, Microwave Oven, umbrellas and much more. Comfort and cleanliness are two look outs that are of high standards here in this hotel. 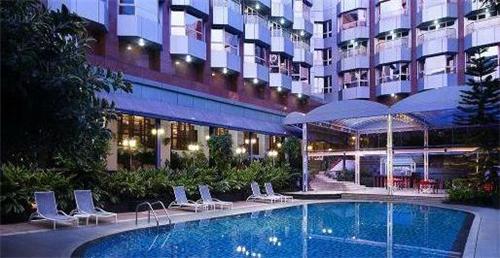 ITC is another luxurious 5 star hotel located just 3 kilometers away from the business centre. With 240 guest rooms, ITC keeps up its class and prestige along with fulfilled expectations of the visitors. Famous for its fine dine experience, Raj pavilion is the multi cuisine restaurant inside the lalbagh gardens with a history of 100 years.

Want to know about the 4 Star Hotels in Bangalore, Click Here

Surrounded by greenery, the hotel is situated nearby the old airport road. With variety of rooms and lawns, it is one of the reasons for it being a top-notch 5 star hotel. The hotel is situated around the location of the MNCs at a walking distance. It also has a rooftop pool, golf course of 18-holes and the British Pub-Geoffrey’s.

The Zuri Whitefield in Bangalore

Present in the IT Centre of Whitefield, this hotel is one of the most elegant and classy hotels for business class. This hotel provides with the set of 156 rooms (including 90 Zuri rooms) and two presidential rooms. ‘Maya Spa’ inside the hotel lets you relax and forget away the stress. Manual security (also CCTV surveillance) is offered to the guests by the hotel.

Komfort provides its customers with a ‘WytRestro’ pub for exquisite dining experience and the flavors of continental and Chinese food items. The 32 rooms of this boutique hotel, a variety of club, standard, superior and executive rooms make it a value for money option for all.

Taj has a group of 5 hotels in Bangalore itself. They are Vivanta by Taj - M G Road / Vivanta by Taj – Whitefield, Kuteeram, The Gateway Hotel and the Taj West End. It goes without saying that Taj group of hotels have always been achieving skies in their hospitality, dining and luxury experiences. 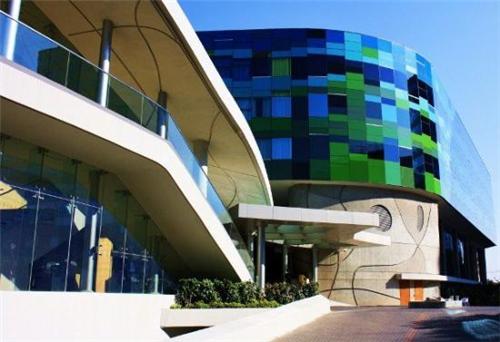