International Society for Krishna Consciousness Research or ISKCON Temple of Bangalore is one of the largest ISKCONs in whole of the world. This temple is located in North Bangalore’s district named Rajaji Nagar and inaugurated by Shankar Dayal Sharma in the year 1997.
The founder Acharya of ISKCON Temple, A C Bhaktivedanta Swami Prabhupada, wanted to promote spiritual learning and Vedic Culture; teachings of whom, Shankar Dayal Sharma (the then President of India) was taking forwaroad with this Temple.

Initially, ISKCON was run from a house that was rented in the year 1987, in the month of September by a handful of followers under the guidance of Sri Madhu Pandit Dasa, President of the temple. 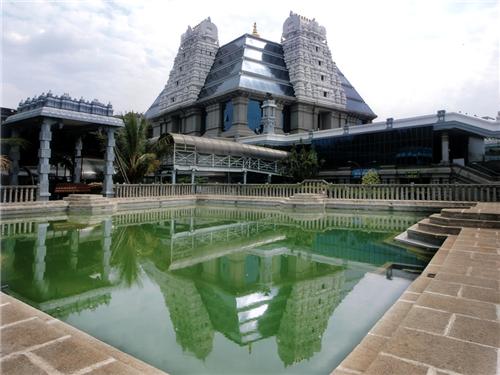 However, with utmost efforts and a sanctioned cost of eleven lakh to be paid back in one and a half months (90 Days) time, the work on the temple began. The devotees were able to pay back the cost with the help of donors and bank loan even though they were with zero-resource when they began on the project.

ISKCON temple is made of gopurum (made up of Ferro cement) and glass as a mixture of traditional as well as modern concepts respectively. In 1997, in the month of April, the ceremony to install the deities was conducted in the temple.
Big public programs in pandals were organized in the month of May. The flag-post or the gold-plated Dwajastambha present there is 56 feet high and the gold-plated Kalasham, was kept on top using a big chain pulley.
A total of 15 pujaris(priests) render themselves in the service of the temple from 3:45 in the morning to 9 in the night everyday. The Mangal Aarti is conducted at 4:15 a.m. everyday. The darshan timings are from 4:15am. to 5am, 7:15 am to 1 pm and 4pm to 8:30pm.

The ISKCON Temple also has its own guesthouse with a space of 70 rooms inside the temple complex. Although the guesthouse is available to the regular visitors of the organization but non-patrons can also avail them if the rooms are vacant. A special Donor Care Center (DCC) is also present inside the temple walls.
Barack Obama, the US President, was one of the great personalities who praised the ISKCONs’ initiative, under the name Akshaya Patra Foundation, for its implementation of Mid-Day meal scheme.
Since its beginning in 2003, the scheme was promoted in all the government and government-aided schools all across the country. Akshaya Patra is presently spread across 9 states on the globe with 19 locations in the country.


How to Reach ISKCON Temple Bangalore:

From Bangalore International Airport to ISKCON:

Keep following the National Highway 4. You will find  BHEL limited after which you have to take a left towaroads the Chord Road. When you see a round-about, take the second end after which you will cross by Shell Petrol Pump.  The temple will be on the left hand side.

Start south-east waroads on the Station road and then turn towaroads your right on the  Thimmaiah road. Take a right turn from the Thimmaiah road and cross Bangalore Diabetes Hospital.