Fast food outlets usually limit their menu to fewer items than the regular restaurants so that it is quick and effortless for them while serving their customers.  If you are one those people who hardly have time to cook for yourself or you're just too lazy to do it, you must be a well acquainted with the fast food joints of your locality. 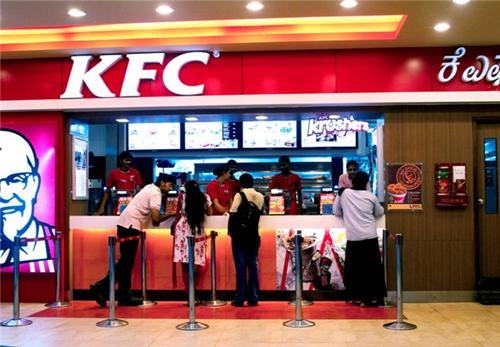 KFC (Kentucky Fried Chicken) is one of the most popular fast food franchises in the world. Most cities of India have at the very least, one KFC outlet. KFC serves some of the yummiest chicken. Bangalore itself has 38 outlets totally.

Even though initially KFC exclusively served chicken, now it sells vegetarian food too. KFC Bangalore sells chicken wings, boneless chicken strips, veg stripes, popcorn chicken, chicken and veg snacker, veg and chicken burgers and much more. Chicken popcorn is one of the sumptuous things available in these joints and sells out faster than a hot cake.

The crushers which are made by flavoring ice chips are very popular among the youngsters. The staff is very friendly, so don't hesitate to ask them for that extra ketchup you want, they wouldn't give you a dirty stare for asking.