The South Parade of pre-independence era, and today’s Mahatma Gandhi Road (renamed in 1948, 26th of February), also famous as M.G. Road.
This road lengthens from the east of Trinity Circle to Anil Kumble Circle with a seemingly never-ending row of food outlets, multi-cuisine restaurants and retails stores on one side. It also accommodates many offices, theatres, banks and other shopping outlets.

The newest addition and the major highlight of the M.G. Road is the M.G. Road Metro Station. Inaugurated on 5th of September 2012, this station is a part of the purple line of the Namma Metro, or the Bangalore Metro, which connects, with the corners of the west.
This course of action was started and constructed by Punj Lloyd in 2011, on 20rth October and is now completed and launched successfully. The boulevard of MG Road is presently reconstructed because of the process of structuring M.G. Road Metro Station there.
The 850 square meters of stretch of this boulevard, along the borderline of  Field Marshal Cariappa Park and also under the elevated track.

Along the stretch of the Boulevard, unique varieties of flowering trees like Mexico’s’ Mondovelli are also planted to give people a pleasuring experience. The timings for the fountain show are from 6 in the evening to 11 in the night. This Road is a foodie’s Paradise in other words. 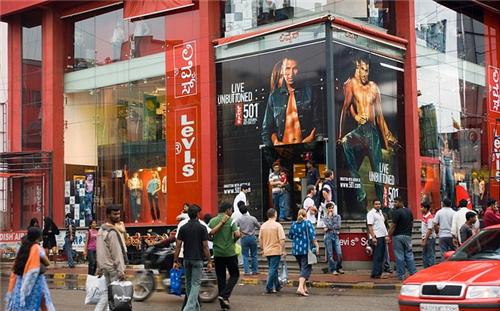 May it be Chinese, Italian, Continental, North Indian, South-Indian, American, Mediterranean, Thai, European and what not! Since it’s also close to the M.G.Road Metro Station, people tend to end up in one of the eating-hubs to serve their hunger.

MG Road Mall-Star Centre is the Best mall of Bangalore, situated on this Road. Also, Garuda Mall, which is one of the biggest malls of India, is located here, in the heart of Bangalore.