They say that it is best to start practicing at an early age in order to achieve success in this highly competitive world. However, we say that there is no specific age for nurturing talent and passion.
R. Umadevi is a perfect example of this. At 47 years of age, she defied all norms by winning the World Ladies Billiards Championship in 2012.

Her journey from being just a regular shy and a financially unstable typist to a highly confident and a successful Cueist is an unforgettable story that has inspired many women trying to achieve in the field of sports.
After obtaining her SSLC (Secondary School Leaving Certificate), she completed her training in typewriting and started working for a horticultural company at Lalbagh in Bengaluru. 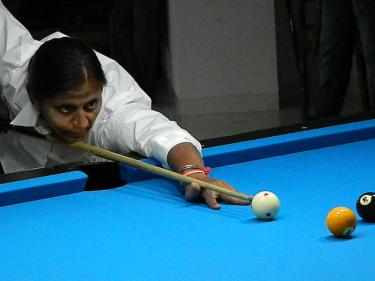 During her free time, she would often visit the Karnataka Government Secretariat Club (KGS) to play Table Tennis. Although, she had always enjoyed playing this sport but when in 1995, secretary of the club – Krishna Kumar handed a cue in her hands, she knew that she was meant to play Billiards.
Umadevi then started practicing this sport after office hours and whenever she got time, and soon, due to her hard work and dedication, she achieved the third position in State Snooker Ranking. This gave her the confidence and morale boost that she required and from there, there was no stopping her.

The third position in State Ranking got her the membership at Karnataka State Billiards Association (KSBA), which not only gave her the proper platform to excel in this sport but also further boosted her self-confidence.
Being an introvert, Umadevi always had problems in communicating with others, however this did not stop her from following her passion and gaining everybody’s respect and admiration.
Later, former national billiards and snooker champion, Arvind Savur took her under his leadership, which pushed her to the next level. Afterwards, the former coach of National Billiards Team, Jairaj also mentored her, which gave her the confidence that she required to further excel in her career.

Having the courage to follow her dreams at such a later stage of her life and excel in it, she has been an inspiration to many other women in the country. Being a World Champion at Billiards, she has never let the fame get to her. 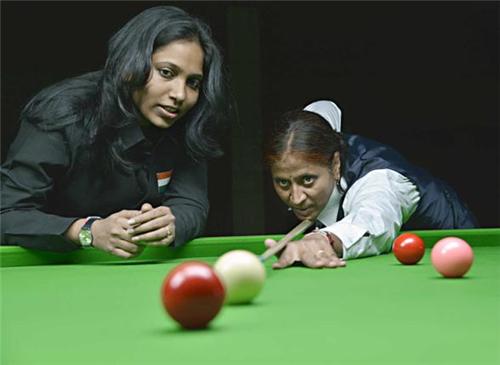 After winning her first national championship in 2002, Umadevi received several offers to compete outside the country. However, due to her severe financial restrictions, she could not go.
Her husband, B G Nagaraj, did a few financial alterations and urged her to go and compete. According to Umadevi, her family has always been her pillar of strength and it is because of their support and hard work that she has reached this stage of life.

Win or lose, Umadevi has never given up. She has worked hard to achieve success and fulfill her dreams. In 2009, she won the Arjuna Award due to her input towards Billiards. She placed third in 2011 World Championship and in 2012; she achieved the World Ladies Billiards and Snooker Association title.