Bangalore, also known as Bengaluru, is the capital city of Karnataka and is being rated as one of the fastest growing cosmopolitan hubs of Information technology in India with a global acknowledgement as the Silicon Valley of India.
Besides its tremendous importance in the political and commercial scenario of the Indian economy, the city is also known to be a popular travel destination.

In Tourism industry, the state is popularly  known as the garden city of India, there are plenty of attractive tourist spots in Bangalore; if you are planning to visit this beautiful city, you must take a prior account of its beautiful sight seeing list otherwise there is dire chance that you may get overwhelmed with options.

The best part of Bangalore sightseeing is that all the tourist spots around Bangalore are located within close proximity of the city hence it is easy and hassle-free to visit these places without thinking much about the modes of transport.

There are lot of public parks in Bangalore, which are must visit because they preserve the green belt of the city amidst all the concrete skyscrapers and provides a good hideout against the daily hustle bustle, for lovers, for students, for the tourists and for the idle.

The Lal Bagh is actually a botanical garden and this natural park was inaugurated by contemporary Governor Hyder Ali in the year 1750. Presently, the park has a rare collection of 1000 plants and a wonderful glass house. Apart from its 3000 acre based natural green, the park also houses Lal Bagh Rock which is anticipated as 3000 year old.

Cubbon Park is another natural park famous for its amazing collection of flora. The park is spread on 3000 acres of land comprised of 96 rare species of orchids. On 1884, this park was inaugurated by Richard Shankey. Besides green attractions, the park also houses a special amusement item for kids; it is named as Kids’ Train.

Some of the Government Buildings in Bangalore speaks of the cultural heritage of the city; hence these building are often visited by tourists.
Karnataka High Court is locally known as Attara Kacheri. This massive building is made of red brick and is built in Greco-Roman style of construction.

Another cynosure in the list of Government Buildings in Bangalore is Vidhana Soudha that is the state legislature house of Karnataka. Made in unique Neo Dravidian architectural style, the building incorporates different styles of architecture like Rajasthani Jharokha, Indo-Saracenic style of pillar, etc.

This signature building was planned by famous architect Kengal Hanumanthaiah and the chief engineer for the building was B.R.Manickam.
The building looks magnanimous with its black granite ambiance and it was built in the year 1956. Its interior woodwork is a great artifice; made of rosewood and Mysore sandalwood the interior style of this house evoke awe and reverence.

Bangalore Fort is one of the oldest historical spots of Bangalore; built on 1537 the fort was originally constructed by Kempegowda.

Tipu Sultan is one of the war heroes of Indian history; Tipu Sultan had his one of the palaces at this city which was used as his summer palace.
It is a two-storied structure cladded with exotic wooden works, elegant and wonderfully built arches, pillar, and porticoes. Built on 1791, these days the palace houses a museum that contains several artifacts of Tipu-Hyder realm.

Mayo Hall was built in British period to pay homage for the memory of Lord Mayo and it is accounted as one of the best designer buildings during British period, made on entirely British architecture.

Bangalore Palace is one of the most popular historical monuments in this city; built on the style of Windsor Castle, England, the palace radiates an aura of its own elegance and flavored history.

National Gallery of modern Art was inaugurated on the 2009 and by this small time span it is being counted one of the best art galleries housing amazing collections from eminent artists like Amrita Sher Gil, Jamuni Roy Rabindranath Tagore, Raja Ravi Verma, etc.

Venkatappa Art Gallery is one of the best art Galleries of Bangalore.

Amazingly this modern cosmopolitan city houses some natural wonders that will keep tourists amazed while staring at them. Some of these never to miss natural wonders of this city are:

Dodda Alada Mara - It is a 400-year old Banyan tree that covers almost 3 acres of land. It is located at Ramohalli, which is 1 hour driveway from the city.

There is a massive rock found in Basavanagudi and the scientists claim that this rock is around 3000 years old. Thottikallu is a place famous for a fall commonly known as TK falls. The beauty of this falls gets enhanced during monsoon.

Nandi hill is famous for its Parvati-Shiva temple. This place is famous as the origin point of three rivers like Palar, Panner, and Ponnaiyar. Nandidurg is the ancient fort situated here. The place is located 60 km away from the main city. The entire hilly terrain is known for its wild beauty.

Besides calling Bangalore the city of Garden, it can also be called a city with museums. There are multiple museums in this city and each of these museums is known for exclusive collection. read more

Madras Sappers Museum & Archives was inaugurated on 1979 and it showcases the industrial history of Madras Engineer Group including their achievement, performance history and armory, accolades, dresses as well as a well articulate sports gallery.

NIMHANS Brain Museum deals with a unique theme – human brain and its different functions. Run by department of Neuropathology, it assists its visitors to learn quintessential details of human brain and nitty-gritty of its functions. The museum has more than 600 brain samples: it remains open on every Saturdays for general public from 10.30 am to 3pm.

Law Museum was established in the year 2006 and it is dedicated to legal profession. The museum is maintained by Karnataka High court.
It has some priceless possessions like original copy of Indian Constitution, plenty of documents related to seals, insignia and books. It also displays the history of the High Court and the expansion of courts over the ages.

Legends Motorcycle Museum is an assortment of 20 antique motorcycles in working condition whose old dates back to 1924. The Museum is the ultimate collection of motorcycle aficionado SK Prabhu. The museum walls are wrapped with biker memorabilia and rare photographs.
The collection includes a 1924 BSA 250 cc, and some uncommon motorcycle models from World War II:  some of its rare collection includes the BSA M20 1942 500 cc, the Norton 500cc 1942, James ML 1942.

Nature and wildlife lovers will find Bangalore extremely interesting for the glimpse of wildlife this modern city presents for its tourists. Some of the most popular wildlife destinations around Bangalore are:

Hebbal Lake: this water body is famous for plenty of water birds and their live display. The lake is maintained by local Bird Watching Club. Bird watchers will get regular access to see around 90 species of birds and some rare birds like pelican, Purple heron in due season in and around the lake.

Butterfly Park is a wonderful place to watch almost 20 species of butterflies. The park maintains an excellent topical weather inside to promote well being of these butterflies. Apart from butterfly conservatory, the park houses an artificial waterfall, colorful flowers around and colorful flora for attracting butterflies.

Bannerghatta National Park is situated at 22 km south of Bangalore. This hilly place is the dwelling place for one of the best natural, zoological reserves. The 25,000 acre spread (101 km²) zoological park makes this a major tourist attraction of Bangalore.

Ranganthittu Bird Sanctuary is known for its rare bird members. It is a very small sanctuary, spread over 0.67 km² and it is made of six islets on the banks of River Kaveri. Bangalore Aquarium is the 2nd largest aquarium in India and it attracts huge tourist flow every year.

St Mary’s Basilica is the oldest church located in Bangalore.

Ranganathswamy Temple was built on 16th century by the king of Vijaynagar.

Kote Jalakantheshwara temple is the eldest temple in Bangalore from Chola era and is located in Kalasipalya.
Memorial Church and Christ Church are two "Original Anglican" churches located in Bangalore City. Both of these churches are located at Whitefield and Basavanguddi, respectively.

ISKCON temple, structured with decorative architectural style, the Krishna Temple is a combo of modern technology and transcendent harmony. The temple is located in Seshadripuram, and finest fusion of modern and traditional features of architecture.

Surya Narayana Temple located in Domlur is one of the Sun God Temples in India. Kote Venkataramana Temple was built in 17th century placed at the old fort area next to Tipu’s palace in Chamrajpet. The temple is famous for attractive granite sculptures.

Huge Shiva is located in old Airport Road and houses a massive idol of Lord Shiva & Ganesha made of plaster of Paris.

IT Parks in Bangalore 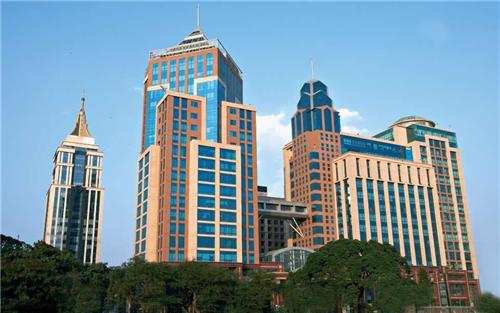