Bangalore has mainly three important stadiums. The Karnataka State Cricket Association's KSCA stadium, the Sree Kanteerava stadium and the Bangalore Football Stadium. The Karnataka State Cricket Association stadium located at the end of the M.G Road, the Kanteeriva stadium besides the Richmond circle and the Football stadium in Richmond Town. The KSCA stadium is mainly established for the cricket matches and the football matches were conducted at the Bangalore Football Stadium regularly during the season. The Kanteerava stadium in Bangalore is constructed especially to conduct the athletics and other sporting activities. 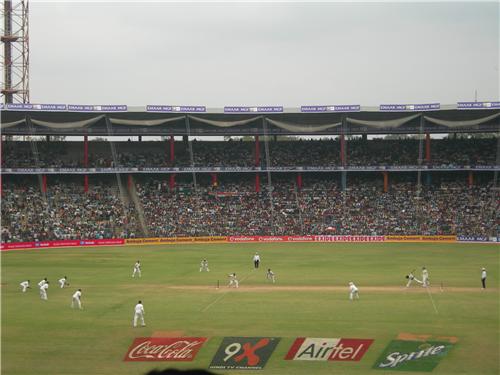 The M. Chinnaswamy Stadium is one of the premier cricket stadiums in India and is located in Bangalore. This old stadium was established in the middle of the Bangalore city and surrounded by the marvelous Cubbon Park, Cubbon and uptown MG Road and Queen's Road. Previously this stadium was named as KSCA stadium and this was renamed in tribute to the Mr. M Chinnaswamy, who was the president of BCCI from 19771980 and also served the Karnataka State Cricket Association for many years. Chinnaswamystadium with a 40, 000 seating capacity, usually hosts One Day Internationals, Test Cricket along with other first class matches. This stadium is not only permitted for the cricket matches, but it also hosts many cultural and musical programs. The Karnataka state cricket team and the Royal Challengers Bangalore (The IPL franchise) selected this has their home ground. Government of Karnataka is the owner of this stadium and the KSCA has taken the lease for a 99 year period.

The Bangalore Football Stadium is presently being used mostly for football matches but actually it is a multi-purpose stadium in Bangalore. This Football Stadium has only 15, 000 seating capacity officially, but a maximum of 40,000 people might be permitted during the football matches. There are many improvements has been made recently to this stadium, like the artificial playing surface, and the synthetic pitch under the FIFA's goal project. The plannings are ongoing to upgrade this stadium to the international standards to host the national football matches. Also the FIFA Regional Academies (South Zone) is expected to come in this stadium.