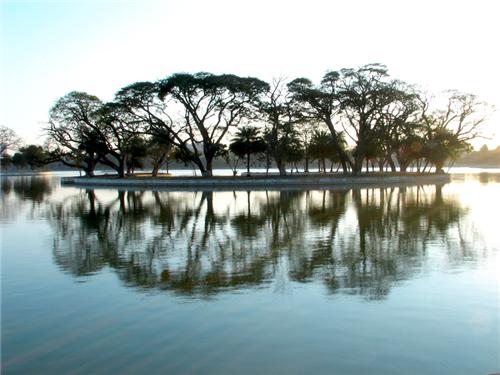 Ulsoor, originally named “Halsur” or “Alasur”, is currently the biggest lake in the Bangalore city. It is also one of the oldest neighborhoods in Bangalore located in the center of the city in “Halasuru” nearing the MG Road.
It spreads over 125 acres area having several islands which make it a major tourist attraction. There is a boat club provided in the lake where tourists can enjoy boat ride and fun at islands nearby. These boats organized by KSTDC are open for tourists on all days of the week even on Sundays.
History dates the creation of this lake to the Kempe Gowdas time while the present lake has been created by the then commissioner of the city Sir Lewin Bentham Bowring.
Ulsoor is the venue for Bangalore city to celebrate the Ganesha festival that takes place every year in August/September.

There is a park which is attached to the lake providing the visitors with lot of shades and greenery which is enjoyed most by the children visiting the place. A gurdwara located nearby is considered as the largest Sikh shrine in the city.
There is a famous temple near the lake which can be visited by tourists and is dedicated to the Subbaraya. A recreational complex situated nearby can be used by the tourists to relax them and enjoy sports like swimming.

Ulsoor Lake was subject to several pollutant threats, due to which the health of its eco-system was monitored at six points for light, oxygen, temperature, types of aquatic plants and nutrients. The study came to a conclusion that the lake which is surrounded at 1.5 square kilometer area is fed by three drains.
First one comes from the Madras Engineering Group center. Second comes from Jeevanhalli and the last but not the least one is from Doddigunta and traverses through Munivenkattappa garden, Kattariyamma garden, New Corporation colony and Muthamma garden. All these drains are located within 1 km distance from the lake inhabited by the slum dwellers.

Findings of the study showed that the DO at daytime was very high varied between 0.2 to 4.5 mg/L. The saprobic nature of the water in lake was reported less than one by the P/R ration.
Further studies confirmed the Eutrophication of the lake that indicated the level of nitrogen, phosphate and chlorophyll to be high. Blue Green Algae known as microcystis was reported from the surface to bottom of the lake.
Also, the presence of zinc, Cd, Cr, Pb and Cu was found to be very high in the sludge samples while the depth sludge was recorded as 1.55 m.